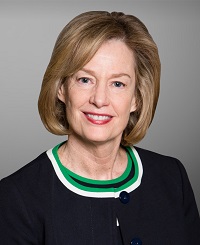 Deborah A. Golden is Executive Vice President, General Counsel and Secretary of GATX Corporation, the global leader in railcar leasing. She is responsible for all legal, regulatory and corporate governance matters at GATX and manages a team of professionals located throughout North America and Europe.  As a member of GATX’s senior leadership team, Ms. Golden is actively engaged in all facets of the Company’s business including developing and implementing global strategic initiatives, and overseeing all mergers, acquisitions and divestitures.

In addition to her legal and regulatory responsibilities at GATX, Ms. Golden is also the executive in charge of Internal Audit and Compliance.   In this capacity, she is responsible for management and oversight of all internal audit initiatives, as well as the development and implementation of effective world-wide compliance and risk management programs.  She has extensive experience in public policy and legislative affairs both at the local and national levels and is actively engaged in transportation regulatory matters.  She is a frequent panelist and speaker on a variety of issues including corporate governance, regulatory and legal matters.

Ms. Golden is a member of the board of directors of Midland States Bancorp, Inc., a publicly-held, community-based financial holding company, where she serves as Chair of the Compensation Committee.  Ms. Golden is also a director on the board of Rolls-Royce & Partners Finance Limited, a joint venture between GATX and Rolls-Royce that is one of the world’s largest spare aircraft engine leasing companies. She is also engaged in numerous professional and civic organizations, including serving on the boards of the Illinois Equal Justice Foundation and Women Employed.  She is a member of The Chicago Network, the Economic Club of Chicago, past Chair of the Board of Governors of Loyola University School of Law and the Senior Leadership Council of Loyola Graduate School of Business.