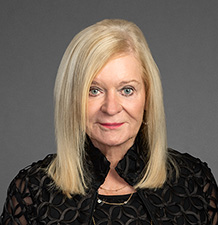 Stasia Kelly, Senior Advisor to the Chair and Executive Director of Client Relations at DLA Piper, has extensive experience as both outside counsel and as a general counsel and brings these perspectives to her practice, working closely with boards of directors, general counsel and in-house legal teams, helping clients design and implement effective governance and compliance programs. Stasia also advises boards and executives on crisis management.

Firmly committed to helping advance women at DLA Piper, Stasia is a mentor to a number of the women lawyers and is on the leadership committee of the firm’s Leadership Alliance for Women (LAW), which is committed to the hiring, development and advancement of women lawyers.

Stasia is the former Vice Chairman of American International Group (AIG), a role she held until 2010.  In this role, she was responsible for the global legal, compliance and regulatory functions, government relations, communications, corporate affairs and human resources.  Ms. Kelly joined AIG in September, 2006 as Executive Vice President, General Counsel and Chief Regulatory and Compliance Officer.  She assumed her additional responsibilities in January, 2009.  Prior to AIG, Ms. Kelly was Executive Vice President and General Counsel of MCI/WorldCom, where she served as the Chief Legal Officer in the restructuring of the company from 2003 until its acquisition by Verizon in 2006.

Prior to MCI, Ms. Kelly was Senior Vice President and General Counsel of Sears, Roebuck and Co. where she restructured the legal and compliance teams.  Before her tenure at Sears, Ms. Kelly served as the Senior Vice President, General Counsel and Corporate Secretary at Fannie Mae.  At Fannie Mae, she centralized the company’s legal and compliance function and upgraded the talent across Fannie Mae’s five offices nationwide.  Prior to joining Fannie Mae, Ms. Kelly was a partner and associate with Wilmer, Cutler & Pickering (now Wilmer Hale) where her practice spanned several areas of law, including regulation of financial institutions and securities firms and corporate and securities.  Ms. Kelly was also associated with Carrington, Coleman, Sloman & Blumenthal, of Dallas, Texas, where her practice encompassed general and business litigation.

Ms. Kelly is a director and past Co-Chair of the Washington Lawyers’ Committee (WLC),  past Chair of Equal Justice Works, and a past director of the Leadership Council on Legal Diversity.  She is on the Board of the Center for Law, Economics and Finance at George Washington University Law School.

Stasia has been honored with many awards that underscore her contributions to the legal profession. In 2014, the ABA Commission on Women in the Profession honored Stasia with the prestigious Margaret Brent Women Lawyers of Achievement Award for her many career successes and her extensive involvement in assisting other women to succeed in the field of law.

The National Law Journal named Stasia to its list of “Trailblazers & Pioneers,” recognizing the top 50 legal professionals in the areas of governance, risk and compliance. The NLJ particularly cited Stasia’s 15-year career as a general counsel, during which she developed governance and compliance teams for four leading public companies and noted her leading role in launching DLA Piper’s Global Governance and Compliance practice.